*Spoiler Alert* If you want to continue loving Red Velvet Cake (RVC) you might not want to keep reading.


I hate to break it to you, but most of you do not love RVC as you claim. Many people have told me it's their "absolute favorite" or "it's so much better than other cakes - especially regular yellow or chocolate cakes." Do you know what RVC is? It's chocolate cake - with A TON of red food dye. Now, I don't mean 'a ton' as in the actual weight measurement because that's way too much. No, I mean a ton figuratively. It's a lot though. Most RVCs call for 1-2 ounces of red food dye. Does that not sound like a lot? Go ahead and look at your bottle of vanilla - chances are it's a 1-ounce bottle. Or think about this: 8 oz in a cup (now, this is only true of AMERICAN measurements. To learn more, look here.) so 2 oz is a quarter of a cup! Chocolate cake with a 1/4c of red food dye. That's what your precious RVC is made of.

To me, that's gross. I'm not one who avoids food coloring. I love me some gushers and I know my sports drinks are colored. BUT not my cake. It just seemed silly to me to eat RVC when you could just have chocolate cake. There are so many harmful effects from red food dye that I just can't pour TWO BOTTLES of it into a cake mix. My cakes are precious, after all.

Why do we make red velvet cake?

I've been doing a lot of research on this, and it seems like way back when, cocoa was processed much differently than it is now. The red tint of the cake came from an imbalanced pH - when the cocoa would react with acidic ingredients, the chemical reaction would have a rusty outcome. Devils food was much the same way and so, I assume, also used to have a reddish tint.

When we began processing our cocoa differently, called Dutch Processing (and no, I haven't figured out what that is yet) this reaction problem corrected itself. As we love our traditions we didn't want to give up that red tint, so we started adding artificial coloring to the cake.

As I said Monday, I was requested to make a RVC for a friend's wedding cake. See the results of that cake here.)  I had thought about making RVC before but never had a good reason to experiment. What I did find, while perusing the lovely interconnected web we have before us, is that many people have used BEETS to dye their RVCs. I can't say I've ever eaten beats before, but I am willing to give it a try!

I made 3 attempts at this. The first one was way sour, the second one a little less so, and the third one seems to have hit it just right. I don't think it tasted like beets, but it definitely has a slight flavor. I had a bunch of people at work try it and they really liked it. In fact, they called the flavor fruity - someone had thought I put cherries in it. So clearly, whatever the flavor is, it's a good thing. 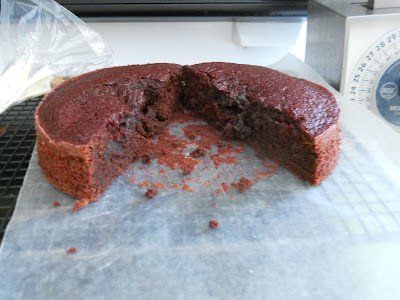 Here's how the sample cake turned out. Maybe not yet as red as I would like it to be, but if you compared it to a chocolate cake you would see a clear difference.

I based my recipe off of (and got a lot of research from) Amy at BakeCakery and mixed it with some information from this SophistiMom.

So far, it seems like this recipe could work. The recipe follows, but please know these are some tricky little cakes. I'm not 100% sure this will be my go-to RVC recipe and I look forward to experimenting more in the future. For now, though, this one gets a --
Okay I just got stuck on a grammar issue. We say "a thumbs up" but doesn't 'a' imply just one thumb? It sounds strange to say this gets thumbs up. I could say "gets two thumbs up" but I only want to give it one. Just my right hand. Any ideas? See, OCD strikes at the oddest moments.


*This note is so important I am putting it as a head-note instead of a footnote. Do not use Dutch Processed cocoa. I don't know what brands to suggest, other than to say that fortunately Hershey's regular cocoa is perfect to use and found in every (I assume) grocery store (at least in America). Make sure you don't get Hershey's Special Dark, just the regular stuff.
Also, I used slightly less than 1 cup - but just make it to taste. I ran out of experimenting time but next time I will try it with 1/2 a cup instead.

Directions
Grease your pans and set your oven. You should know this by now.

Cut whole beats into pieces small enough to fit in your food processor or blender. Add the juice from two lemons (should be about 1/2 a cup, maybe less). Puree until very, very smooth. More chunks will be tasted in your cake and I have red it will give it less red color. Mix in the vinegar. Measure out 3/2 cups for the cake mix and set it aside.

"Cream" sugar with oil. It's in quotes because it doesn't cream the way it would with butter, but mix it for a while so the sugar starts to break apart and everything is really well combined. Add the eggs, one at a time, and mix until completely blended. Add vanilla and yogurt.

Alternate adding your dry ingredients with the milk. Once everything is nicely mixed, fold in the beets.

Baking time depends on what pans you are using, so just watch them in the oven. Two 8" rounds should take around 50-60 minutes.

I linked up at